After Notley Hollis death, Anastasia resumed using the last name of Taylor, for at least one transaction in 1795.  She married a Jesse Powell some time in 1795 or 1796.

John Hollis b. 1700 and Esther Canterbury

In 1739, John Hollis, (Moses Hollis and Notley Hollis’ father), witnesses the will of Catherine Padderson (who is the mother of Alexander Gowin), in Prince William County, Virginia.

Catherine Padderson writes her will May 21, 1739, and it is presented for probate July 23, 1739, indicating that her death date in the two-month period, according to “Prince William County Will Book C” by John Frederick Forman. The will leaves her estate, valued at £36:2:4.75, to two younger children and names her son John Gowen as administrator. The will reads:

“I, Catherine Padderson, being sick and weak in body. Unto my well beloved son, Elixander Going, one negro man named Robin and one horse and a horse colt and one cow and calf and a cow yearling and halph of my movable houshold stuf and one parcel of land whereon I now live containing sixty-six acres, it being part of a tract containing one hundred and thirty-two acres. Unto my well beloved daughter, Susannah Going, one negro man named Jackey and one mare and saddle, cow and calf and two cow yearlings and one feather bed and bolster, a rugg and one pare of blankits and half the household stuf. My crop of tob: which is now in my house after my debts is paid I bequeath to be equally divided between my son Elixander Going and my daughter Susannah Going. I leave my well beloved son, John Going, whole and sole executor of this, my last will and testament. 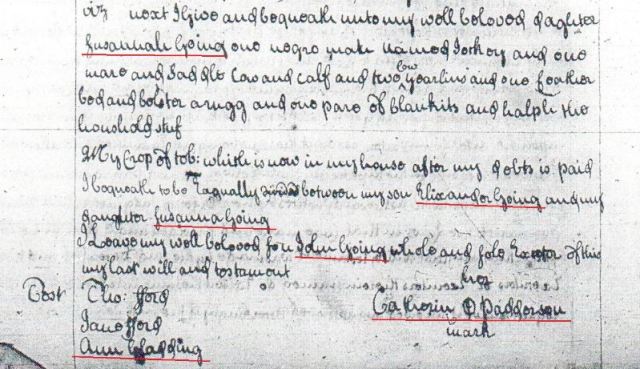 “23, July, 1739. Presented in Court by John Going, sole executor herein named, who prays certificate for obtaining a probate thereof, but it being suggested that the deceased’s husband is living, on the motion of the said John Going and giving security for his just and faithful administration of the said deceased’s estate, certificate is granted him for obtaining letters of administration.” “Bond of John Going, William Scutt (Scott) and John Hollis unto Denis McCarty, Gent., justice. For £100, 23 July, 1739. John Going is administrator of Catherine Padderson, deceased. John Going, John Hollis, William Scutt (Scott).  Witness: John Bowie, 23 July, 1739, Acknowledged and Ordered”  The inventory of the estate, which included two negro men valued at 25 pounds, totaled 36 pounds, 2 shillings, 4 3/4 pence and was presented to the court by John Gowen August 27, 1739. The account which was allowed and ordered by Prince William County Probate Court, read: “The estate of Catherine Pattison, deceased. To 2 levs. pd. Edwd. Barry 116 (tobo.) To pd. Capt. Val Peyton 364 To pd. Thomas Ford 40 To pd. Alexander Gowin 330 To pd. Susanna Gowin 250 To bal due per John Gowin 468 To pd. Mr. Wm. Dunlop 7:4:- John (X) Gowin” [“To” is apparently an abbreviation for “Total;” “tobo” is apparently an abbreviation for “tobacco”.]

In 1755, both Moses Hollis and Notley Hollis are found on the tithe list of Orange County, North Carolina.

(Notley Hollis’ daughter is confirmed in the following deed transactions that show chain of title on properties in Fairfield County, South Carolina):

On February 28, 1820, Lyttleton Hollis, Moses Hollis, Burwell Hollis, Benjamin Hollis, John Dunlap and Elizabeth his wife all of Fairfield County, SC, conveyed to Hugh Going a one half moiety of a tract of land on Wateree Creek that was part of a 200 acre tract that had been originally granted to John Lee, then from him conveyed to Notley Hollis, and then to Elizabeth Hollis his daughter and only heir at law of Notley Hollis, and then to James Hollis from a Canty.
Witnessed by P E Pearson and James Greg.
Signed by Lyttleton Hollis, Benjamin Hollis, and Burrel Hollis.
Fairfield County, SC.

Fairfield County, South Carolina, Land Deed Series, Deed Book DD, Page 174-75, February 28, 1820.  “Lyttleton Hollis, Moses Hollis, Burwell Hollis, Benjamin Hollis, John Dunlap & Elisabeth his wife of the District of Fairfield”, in consideration of the sum of ten dollars, conveyed to Hugh Goings [sic] one half of a tract of land situate “in the district of Fairfield and state aforesaid on the waters of the Wateree Creek, being part of a tract of two hundred acres originally granted to John Lee, by him conveyed to Notley Hollis and Elizabeth Hollis, conveyed to James Hollis, one Father deceased, she being the only heir at Law of the said Notley — the moiety hereby conveyed is the residue of the Said tract of two hundred after deducting therefrom the part will appear by reference to the deed from said Cantry to said Hollis“.

On February 2, 1822 Samuel C. Stark of Fairfield conveyed one half a moiety of a tract of land on Wateree Creek to John B. Pickett.  The tract was part of a 200 acre tract granted to John Lee, then conveyed to Notley Hollis and by Elizabeth Hollis to James Hollis, and then conveyed by Genl Zach Canty to Littleton Hollis, Burrell Hollis, and Benjamin Hollis.  Then the land was conveyed by Burrell Hollis to Hugh Goin and by him to Samuel C. Stark.  The amount being conveyed is less the amount that Genl Zach Canty conveyed to John Hollis Jr.   Witnessed by:  Abraham Ferguson and Zeph Pickett.  Signed by:  Samuel C. Stark.

On April 8, 1822 John Hollis conveyed to Zephaniah Pickett 100 acres that was part of a larger tract that had originally been granted to John Lee for 200 acres.   Lee conveyed it to Notley Hollis, and then from Notley Hollis’ daughter Elizabeth Hollis it was conveyed to James Hollis.  The Sheriff then conveyed it to Genl Zachariah Canty who conveyed it to John Hollis.  The land is located on the Mill Creek branch of the Wateree Creek and bounded by Richard B. Harrison, John Pickett, and Burrell Hollis in Fairfield District, South Carolina.  Witnessed by:  Abraham Fergusson and Moses Knighton.  Signed by John Hollis.  John Hollis‘ wife, Letty Hollis gave up her dower rights on May 9, 1822.

On January 1, 1795, a Stacy Taylor (looks to be Anastasia Taylor Hollis – widow of Notley Hollis), conveys 200 acres of land on Wateree Creek in Fairfield Co, SC,  originally granted to John Lee (see above deeds – this is land that was conveyed to Notley Hollis).  She conveys this land to her nephew, John Hollis.  This deed is witnessed by Berry Hollis, Elijah Hollis, and John Dunlap.  Stacy Taylor signs her name with the mark “H” – likely for her previously married name of Hollis.

In 1796, it appears that Anastasia “Stacy” Taylor Hollis has remarried to a “Powell” (looks to be “Jesse Powell”).  On March 6, 1796, she files an affidavit with Charles Pickett, Justice in Fairfield County, SC, that her daughter, Elizabeth Hollis, had died in 1794, when she was 23 years of age at that time.  This affidavit is recorded on March 6, 1796.   According to the deed records listed above, this was Notley Hollis and Anastasia (“Stacy”) Hollis’ only heir.

On October 1, 1804, Jesse Powell and Stacy Powell file to administer Elizabeth Hollis’, Mary Hollis’, and Margaret Hollis’ estates.   (This appears to be Anastasia Taylor Hollis – who appears to have married Jesse Powell some time between 1795 and 1796).  Elizabeth Hollis is the daughter of Notley Hollis and Anastasia (Stacy) Hollis – I can only assume that the other two women listed were other daughters that possibly died young as well. 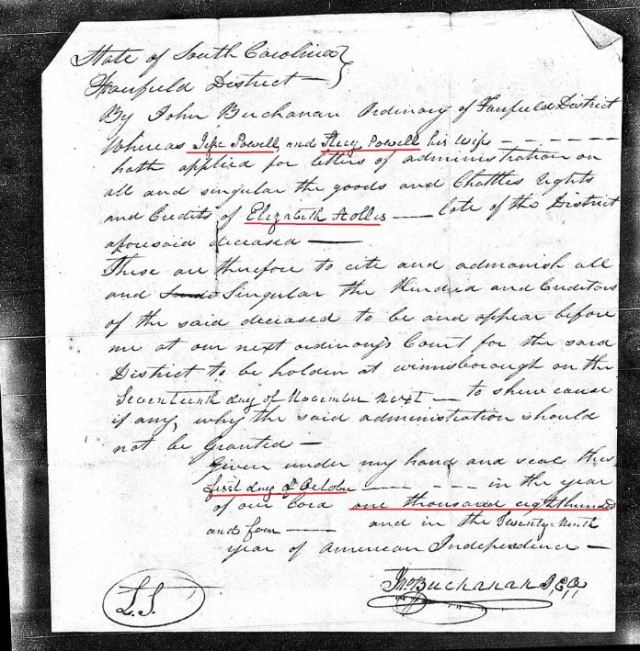 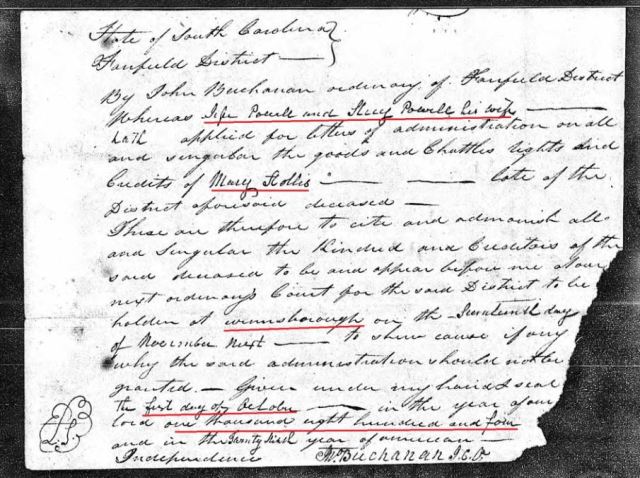 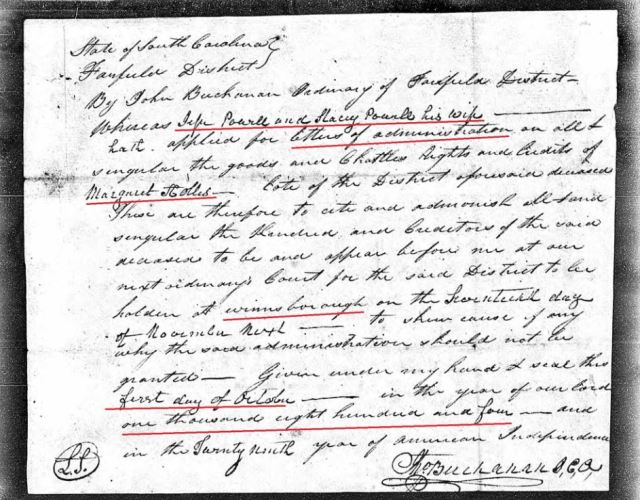