John Hollis b. 1700 and Esther Canterbury

In 1746, an Edward Hollis shows up in Fairfax County Deed Records show the following transactions involving those with the surname of Hollis:   1) 1746 Edward Hollis to John Carlyle a sale. Deed Book A1, p. 538.
http://www.fairfaxcounty.gov/courts/circuit/pdf/deed-book-index-1742-1797.pdf

Edward appears to be the first to take leave of the ancestral Virginia home, when he acquired a land grant in lower Fairfield County, South Carolina, along the border with Richland County. Edward was a cooper, which is to say, he made barrels.

In 1749 Edward Hollis appears in South Carolina and receives a 450 acre land grant on the Wateree in SC, nearby William Scott (in 1751), and Thomas Going (in 1752) – neighbors from Fairfax Co, Va – also move to the Richland County, SC area.  1749 petition of Edward Hollis who came lately from Virginia with a wife and seven children to settle in the forks of the Santee River – http://www.vgs.org/documents/virginia-genealogical-society-newsletter/vols-i-xxv/208-vgs-newsletter-vol-23-1997/file

In 1751 William Scott moves in adjacent to Edward Hollis on the Wateree in SC.  William Scott was living in Prince William County, Va prior to this.  He signed as a witness in the 1739 probate of Catherine Padderson (mother of John Going Sr).  Also signing on her probate was John Hollis – father of Edward Hollis.

1752 Feb 4 – Thomas Going, son of John Going Sr and Mary Keith Going, moves from Fairfax Co, Va to the Richland Co, SC area.  He receives a plat for 750 acres on the north side of Congaree, South Carolina, Pursuant to a Precept to me directed by George Hunter Esq his Majesties Survoyor Genl. directed the 4th day of February 1752. I have measured and laid out unto Thomas Going a plantation or tract of Land containing seven hundred and fifty acres situate lying and being on the North side of the Congaree otherwise Seludy River on both sides of the Creek called Collins Mill Creek butting and bounding on all sides on vacant land and hath such shape and form and marks as the above plat represents. Given under my hand this 9 of March 1752. John Fairchild; Description shows on map below to be: Future Lexington Co, SC (county south of Fairfield Co). D.S.http://www.archivesindex.sc.gov/onlinearchives/Thumbnails.aspx?recordId=95289  Looking at map – the description shows:http://battleofcamden.org/1773sc.jpg Petition for Thomas Goings indicates he has a wife and 9 children, and prays for 550acres on or about the Congree River. Petition on Feb 4, 1752. 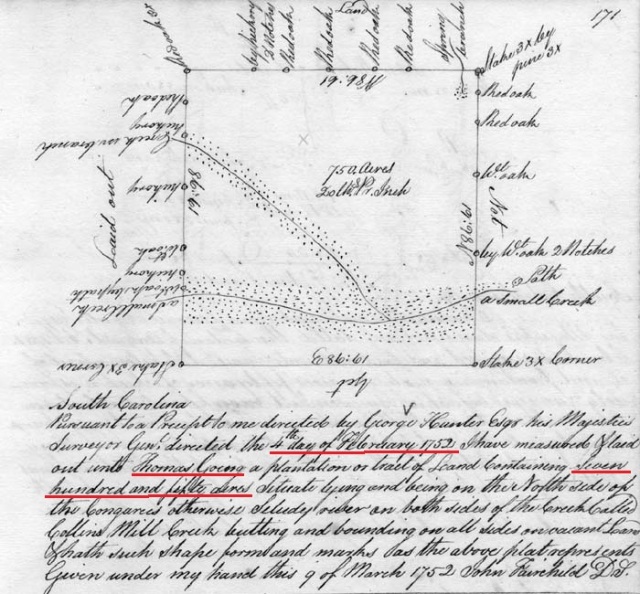 In 1757, Edward Hollis‘ memorial for his land is filed with the court

28 & 29 Sept 1761 L&R. Edward Hollis, cooper, to William Howell, planter, Vawter & John Taylor; SE on John Taylor & Raiford’s Creek; SW on Raiford’s Creek; NW on John Fairchild, Esq. & Raiford’s Lake or Creek. Whereas on 1 Jan. 1745 Gov. James Glen granted Solomon McGraw 200 a. on N side Santee (Congaree) River, opposite Saxegotha
Township, bounding NW on Philip Raiford, Jr. (now Bartholomew Vawter) & on John Fairchild; NE on John Pearson (formerly said Vawter);……….(more legal not important).
This gives us a pinpoint of where he lived. Map indicates the Santee and Congaree merge at Columbia, SC. A dam, in 1997, called Saluda is located just west of Columbia. The Santee river flows to the Atlantic and empties about 30 miles or so north of Charlestown. It also branches off straight to Charlestown and would make ship travel back to Virginia fairly easy.South Carolina Deed Abstracts 1719-1772 Vol. 14 Deed Book 1767-1773, by
Clara A. Langley.Book S-3 pp. 65-70 http://webcache.googleusercontent.com/search?q=cache:vYuDD_PtgUIJ:www.vawterfamily.org/Georgene/Bartholomew%2520Vawter3,%2520John2,%2520Bartholomew1.docx+&cd=3&hl=en&ct=clnk&gl=us 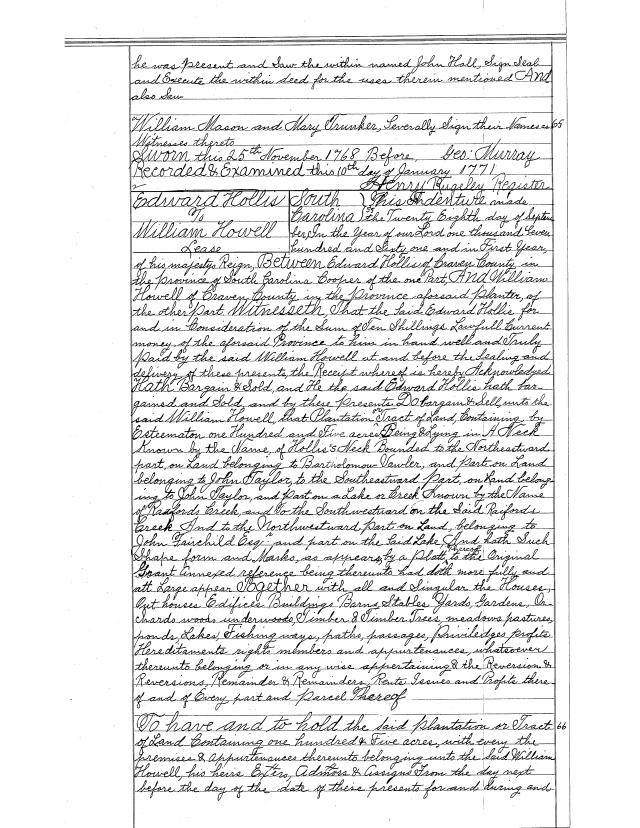 In 1769, Edward Hollis is living adjacent to Thomas Taylor in Craven Dist, SC 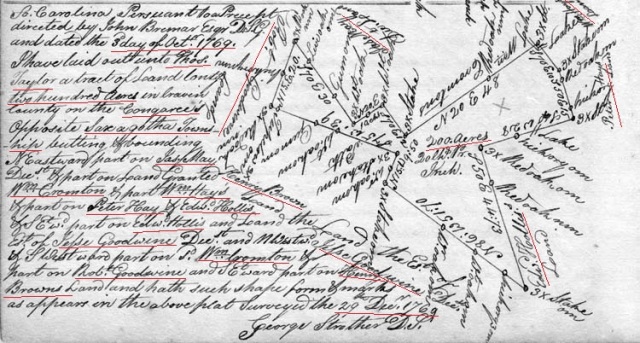 1769 Sept 27 – Edward Hollis of Craven Co, SC a Cooper, and John Pearson a Planter. Edward Hollis sells 131 acres of land on the Congaree that was laid out to Richard Jackson in part and Thomas Jackson in part 81 acres on 16th and 17th of June 1752 and selling 500 acres to Edward Hollis on May 14, 1752, and to John Fairchild in part originally granged to William Crompton 50 acres and conveyed to Edward Hollis on Aug 7th and 8th 1751 at the Congaree on N side of Santee R bounded N by land of Richard Jackson and Thomas Jackson, and John Fairchild. John Pearson paid 200 pounds to Edward Hollis. Rent of one pepper corn to Edward Hollis on last day of said term. Transfer use and possession to
John Pearson. Located opposite to Saxegotha Township. Bounded by William Hay, and vacant land. Signed by Edward Hollis. Witnessed by Nathaniel Partridge, Joshua Briggs. Proved up on Aug 10, 1770 by Nathaniel Partridge. Recorded on Oct 8 and 9, 1770.  http://www.charlestoncounty.org/departments/rmc/archive-search.php 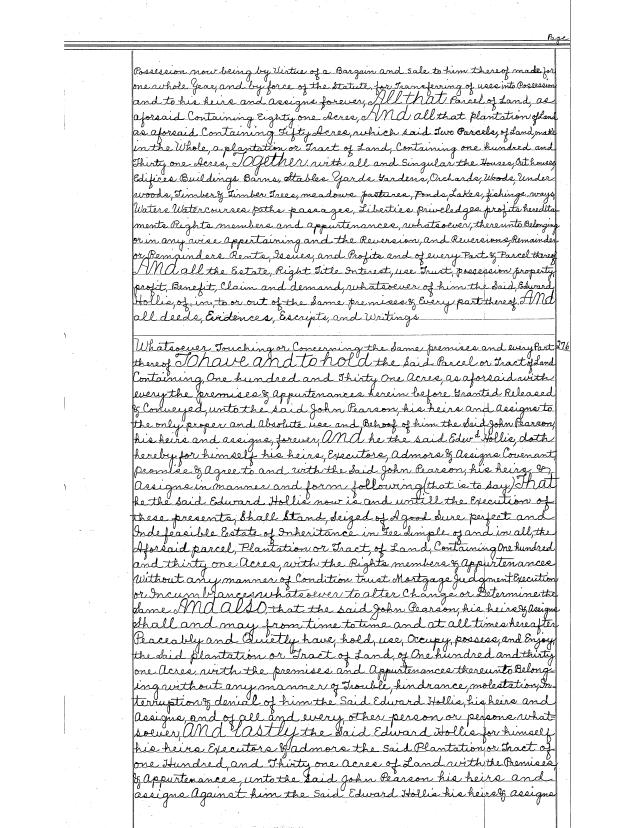 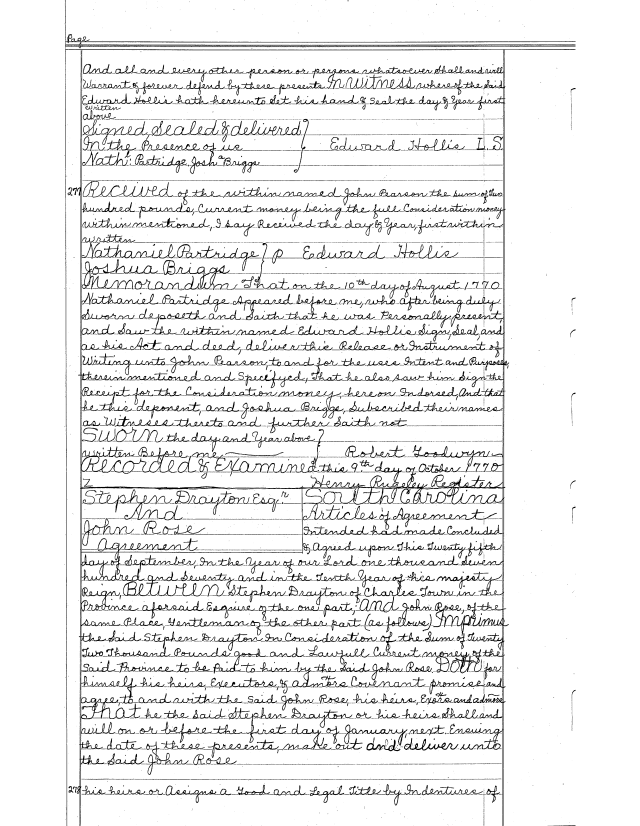 In 1770, Edward Hollis conveys a lease and release to John Pearson and William Howell in South Carolina

1770 Edward Hollis to John Pearson lease and release in SC

1770 Edward Hollis to William Howell lease and release in SC

In 1770, Edward Hollis is living adjacent to John Lowerman on the Congaree in South Carolina 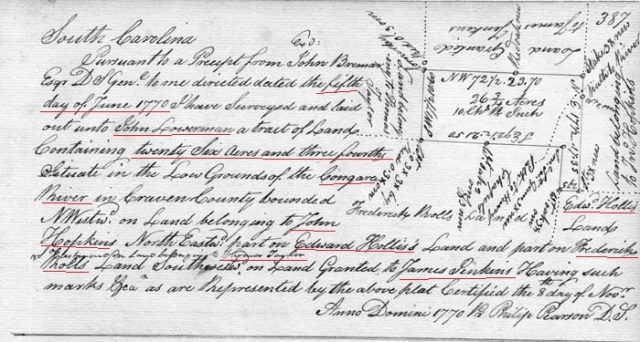 1790 US Census in Richland Co, SC with Edward Hollis

1790 US Census with Edward Hollis in Richland Co, SC snip

Edward Hollis‘ will confirms his occupation as a “Cooper”.  He names his wife as Elenor Hollis.  He names his son as Abram Hollis in Pennsylvania.  He names a daughter as Jane Wright.  He names another daughter as Ann Garret.  He also indicates he has another unnamed son that is in the Kingdom of Ireland.  Executors appointed in will are:  Elenor Hollis – wife, and Richard Brown.  Witnesses are:  Mary Brown, John Baneroff and Granvill Thomson.

Regarding Edward Hollis’ son in Ireland, it is possible his son that moved to Ireland did so because he chose the wrong side in the Revolutionary War – possibly joined the English military, and that is why he is in Ireland (he left after the side he chose lost).  His son in Pennsylvania has not been located by documents yet.  Will update if located). 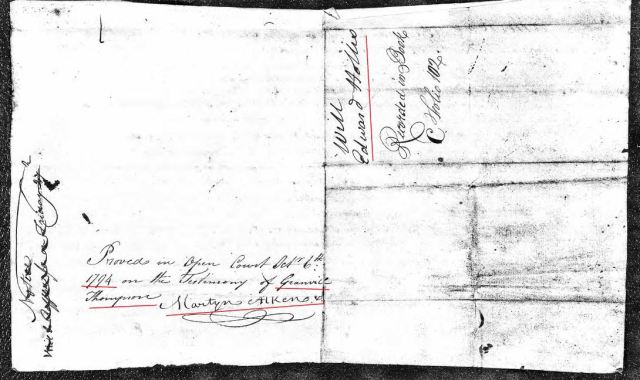 June 25, 1796 a return of appraisement of Edward Hollis‘ estate is filed with the Richland County, SC Court by Jonathan Baneroff, William Fox, and Henry Fox. 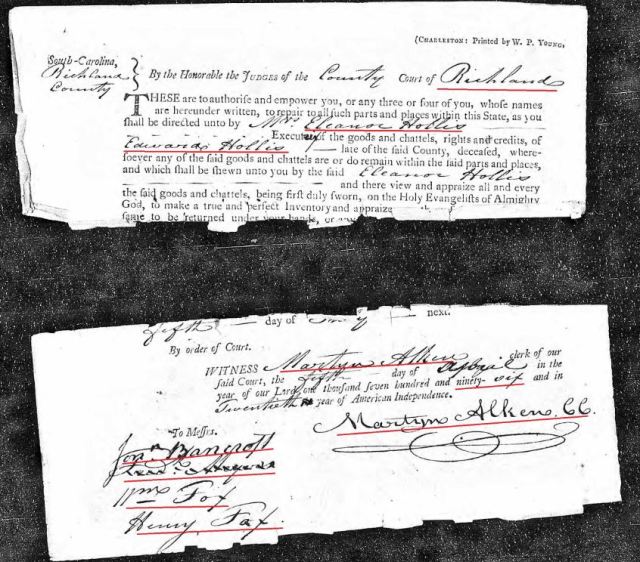 A return of the appraisement of Edward Hollis‘ estate was filed by William Fox, William Rivers, and John G. Bortick.  Sworn by Richard Brown executor. 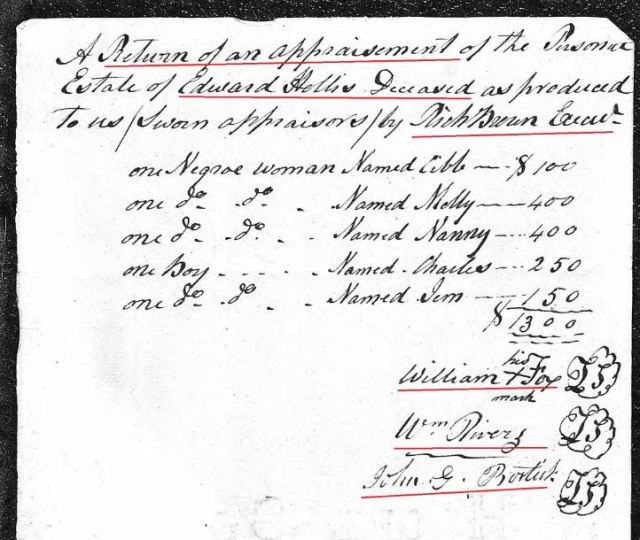 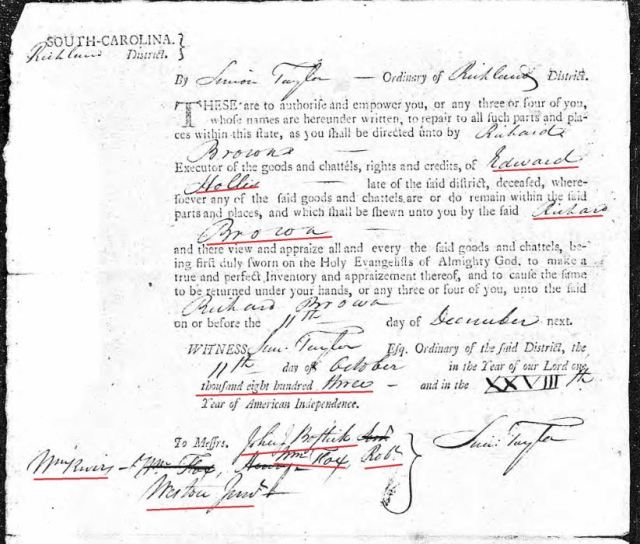