1732 Jan 18 – Moses Bass received land on the north side of Bear Swamp in by his father’s will in Bertie Co, NC:
18 January 1732 at NC at age 58 The will of John Bass reads as follows (the print is small and difficult to read making a number of gaps):

1761 Aug 19 – On 19 August 1761 the Cumberland County Court granted permission for the mill Moses Bass had erected on Raft Swamp to be designated a public grist mill, and the court granted him a license to keep an ordinary [Minutes 1759-65, 70].

1762 May – In May 1762 Moses Bass posted bond not to leave the county before the next court to answer a suit by the governor and James Simpson, but he was not mentioned again in the Cumberland County Court Minutes.

1762 May – Domini Rei vs Moses Bass – His Majestys Justices
Moses Bass in open Court acknowledged himself to be indebted to our Sovereign Lord the King in the sum of 50 pounds … John Smith & Stephen Phillips his securitys in the sum of 20 pounds like each … Conditioned for the appearance of the sd Moses Mass at our … Court of Pleas and Quarter Sessions – to be held at the Courthouse thereof on the third Tuesday in August next term
[Minutes 1759-65, 78. Cumberland Co, NC].
https://www.familysearch.org/ark:/61903/3:1:3Q9M-CS4G-MWPK-1?i=99&cat=354464 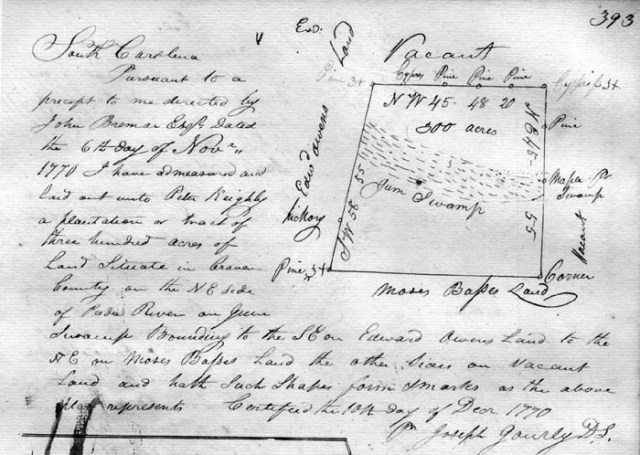 (Note: It appears a Jacob Goins had died around 1773 in

1788 August, “Thomas Goin” applied to the County Court of Greene County, Tennessee for the administration of the estate of Elizabeth Bass, according to “Bulletin of the Watauga Association,” Volume 10: “August 1788. On motion of W. Avery, Esqr. atto. for Thomas Going for obtaining letter of administration on the Estate of Elizabeth Bass, decd. ordered that the same be laid over until next term, for proof of sanguinity [kinship, blood relationship] & that a dedimus potestatem [acommission to take testimony] issue in favour of said Thomas Going to Anson & Richmond Counties & to the State of South Carolina by giving fifteen days notice to Jeremiah Bass of the time & place where such testimony will be taken, ditto for Levi Bass to South Carolina giving Thos. Going fifteen days notice at least.” Green County, Tennessee. Greene County Tennessee Court minutes 1783-1796. p. 94.  https://www.familysearch.org/ark:/61903/3:1:3Q9M-CS3W-2K31?i=52&cat=301915

1788 October 14 – Know all men by these presents that I Edward Gowen of the County of Granville for divers good causes and considerations thereunto [me] moving more especially for the sum of Â£25 to me in hand paid, the receipt of which I do hereby acknowledge, hath bargained, sold & made over, and by these presents, do bargain, sell and make over to my nephew, Thomas Gowen all the estate, right and interest I have or hereafter may have to the estate of Elizabeth Bass, deceased, or any part thereof, and do hereby make over the same to the said Thomas Gowin, his heirs and assigns from the claim of me, the said Edward Gowen or any other person whatever claiming under me. In witness whereof I have hereunto set my hand & seal the 15th day of October, 1786. Edward Going .  Witnesses:
Henry Meghe
Allin Hudson
Jhn. [X] Simmons”
John Simmons later appeared in Granville County Court to prove the deed of “Edward Gowing” to “Thomas Gowing,” according to “Court Minutes of Granville County, North Carolina, 1746-1820,” page 28 by Zoe Hargett Gwynn.  Edward Gowen of Granville County, North Carolina, regarded as a kinsman of Thomas Goin, was also named an heir of Elizabeth Bass. On October 14, 1788 he conveyed his interest in her estate to “his nephew, Thomas Gowen,”according to Granville County Will Book 2, page 79. Granville Co, NC.

1789 Feb 2 – The Court after Jeremiah Bass & Thomas Going gave bond & Security for the administration of the Estate of Elizabeth Bass deceased & the Bill in Equity being filed and drawn by Thomas Going the Court gave judgment that neither should have the administration before Nancy Finney signified her assent in writing from which Jeremiah Bass by his attorney Alex McGinty his attorney appeals.
Minutes 1783-1799 p. 108 – County Court minutes (Greene County, Tennessee).
https://www.familysearch.org/ark:/61903/3:1:3Q9M-CS3W-2K92?i=59&cat=301915

1789 May 5 Tuesday – Thomas Going and Jeremiah Bass hath leave to administer on the Estate of Eliz Bass decd took the oath of Administration and enters into bond themselves with John Stone & John Gibson their securities in the sum of two thousand pounds for their due administration according to law.
Jno McNabb to pay 20 more
Ord that letters etc Issue – 2 letters issd.
20 S pd. Clk.
Minutes 1783-1799 p. 114 – County Court minutes (Greene County, Tennessee).
https://www.familysearch.org/ark:/61903/3:1:3Q9M-CS3W-2K7V?i=62&cat=301915

Another transcription of the above book reportedly says:

1820 Apr – Bk I, p 224 – Robert Bass sold to Patrick Donnally of Georgetown lands on Bassett Mill Creek being part of land originally granted Daniel LeRoache and sold by him to William Peake and by said Peake to James Owens and from Owens to Moses Bass and from Moses Bass by last will and testament to Right Bass Sr and by last will of Right Bass to Robert Bass.

Basses Mill, formerly Hulin/Hulon’s Mill, is located on Hwy 301 in Dillon County, just a little below town of Latta as stated, right where 301 crosses Catfish. It is discernible as you drive along the highway, mostly because of the dense growth of kudzu that now completely covers the whole site. You can see a rather large cemetery on a hill beyond it, I presume this is the Hulon Cemetery that was earlier copied by someone and posted to this list, but I’m not sure about that. The road that leaves Hwy 301 at this point and runs beside the old millsite is now named Basses Mill Road. It can be found on detailed highway maps as State Road #524.

There was another Basses Mill in old Marion County, and the other Basses Mill was also the site of a later (1781) Rev War skirmish. The mill near Latta would not have been known as Basses Mill during the Rev War. Joseph Bass, who owned the land around Bass’ Mill on Catfish, is said by Bass family researchers to have been related to the Moses Bass who had the earlier Bass’ Mill over near Great Pee Dee River.

As described by Bishop Gregg in his “History of the Old Cheraws, the older Basses Mill belonged to Moses Bass. It was situated a little southwest of the one near Latta, in a triangle formed by Hwy 301, Gum Swamp/Marsh Creek, and the Great Pee Dee River, back close to the old Sandy Bluff settlement on Great Pee Dee, and probably part of that settlement, or at least served it. I have a friend who has been to the old millsite, and found it much as Gregg described it, easily identified by the circular waterways, including the man-made ditch, and the causeway. He tells me there is a ruin of an old cemetery nearby, with absolutely no stones remaining, if there ever were any.

In August of this year (1781 -jcd), Colonel Murphy was stationed, with a small force, near the mouth of Black Creek. He sent word to OLD MOSES BASS,who kept a noted public-house at the mill on Naked Creek, across the river and about four miles distant, that he would be there with his men on a certain day, and to have a good dinner, with plenty of cider, in readiness. By some means, the Tories in the neighborhood were informed of the expected visit, and made preparations for attacking Murphy at Bass’s. The house stood on a small island, made by a sudden bend of the creek, forming almost a circle, and a canal cut across the neck of land leading out to the main road near by.

On the appointed day, Murphy and his party went over, suspecting no danger. While at dinner, they were suddenly surprised by the enemy’s approach. Two men came rapidly up on horseback, and were in the act of crossing the creek by a causeway when first discovered. They were followed by the main body, under Major Barfield.

Some of the Whigs, who happened to be on the piazza, were fired upon, and for a moment all was confusion. By this time, the Tories had approached within fighting distance, and the conflict began.

The Whigs having the benefit of a cover, soon gained a decided advantage, killing several of the enemy, with the loss, however, of two of their own number, Harper and Mixon. Giving way under the effective fire from the house,the Tories were in the act of retreating, when one of Murphy’s men, named Daniel, who had a stentorian voice, cried out, “Good Heavens! what shall we do? the powder is out.” Upon hearing this, the Tories returned to the fight;and the Whigs, no longer able to keep up an equal fire, were forced to escape in every direction across the creek, to the cover of the thick timber beyond.It ran but a short distance in the rear of the dwelling. Reaching it by a few bounds, they tunbled down the steep bank, and got off without further loss.

“One of their number, a man named Thompson, from the Poke Swamp settlement, on the west side of the river, as he jumped the fence near the creek, found a large and powerful mulatto, Shoemake by name, pressing closely upon him, with his rifle aimed and in the act of firing. Happily for Thompson, the rifle missed fire, and before it could be adjusted, he made his escape. Twenty years after, Thompson heard of Shoewmake’s going to Camden, caught him on his return, and inflicted severe punishment. Peter Boseman, a valiant soldier of Liberty, who afterwards settled and died in Darlington District, was one of Murphy’s party.

“Malachi Murphy was another, and received a wound in the shoulder as he reached the creek, which disabled him for the time. He fell down the bank, and crawling under a large log, remained there undiscovered, though the Tories several times passed near him. Daniel, whose unfortunate exclamation led to the disaster, was a man of powerful frame, and carried Murphy on his shoulders to Black Creek, making some amends thereby for his untimely blunder.

“Thus ended their day’s frolic for the Whigs, teaching them the lesson which so many have learned too late, that vigilance is the price of liberty.”

This earlier Basses Mill near Great Pee Dee has been completely forgotten by locals. In fact, little trace of it exists, and was so far back in what is now the boonies that hardly anyone ever passes that way. So whenever someone mentions Basses’ Mill, people now immediately think of the one on Hwy 301, as they have no knowledge of the earlier one on Naked Creek. (Naked Creek, by the way, is not to be found on any map of the area that I have ever seen. The name of the creek has perished along with the memory of Moses Bass’ Mill and public-house. I believe it is the one referred to in later deeds as Basses Creek, which is likewise not to be found on any known map.) 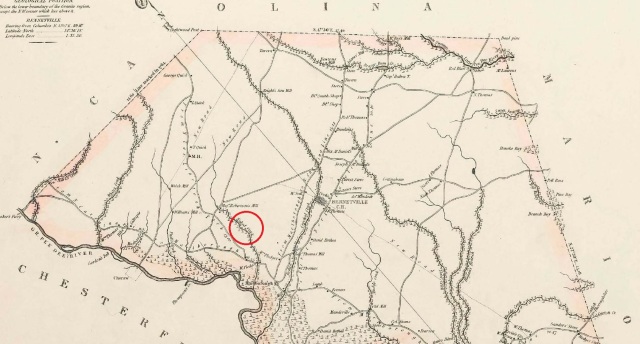