Y-DNA tests show several matches between the Going, Keith, and Hollis families that lived in the Virginia, North Carolina, and South Carolina areas from around 1700-1830ish.

Those people listed below are researchers who have submitted a Y-DNA test for themselves (or another male descendant of their line) – and all have matching Y-DNA … Meaning we all descend from a common paternal ancestor.  There are other random surnames that match with 1 or 2 people – but the Going, Hollis and Keith family connections appear to go way back based on the number of people who match, and based on the various lines these researchers descend from.

My research shows a connection to the Keith family through John Going b. abt 1700 who married Mary Keith (daughter of Cornelius Keith b. abt 1680ish and appears to have received his first land grants in Stafford County, Va around 1713-1715).  Obviously my Y-DNA match does not descend from Mary Keith, since Y-DNA only descends from father to son.  What this does show is that there was a family relationship with the Keith family and that the Going and Keith

People who match include the following Y-DNA testers (and their oldest known ancestor with their corresponding surname):

16) Ron Lee Goins
(no ancestor listed – but assuming that since same email as above, must be same person – just different relative – cousin or something). (Info on his research: http://lumbeeindiansandgoinsfamily.blogspot.com/2011/09/thomas-going-research-part-i.html ) through Burton Goins (son of Thomas Goins 1729-1797).

7) Donald Keeth – researcher – did not give ancestor info

The Y-DNA tests from the following lines of John Hollis b. 1700 and William Going b. 1682 are matches – based on Y-DNA test results to date.  Both have two male children that Y-DNA testers trace back to.  This suggests that there was a common paternal ancestor some time before the estimated birth date of John Hollis in 1700 (if not further back).

Looking at the above Y-DNA results shows that our matching lines are in the E-M2 haplogroup (which has also been called E1b1a, or E3a) – see:  https://en.wikipedia.org/wiki/Haplogroup_E-V38 .

This line is the Goyen/Going line that descends through William Going b. abt 1682, and the descendants of John Hollis b. 1700 – both out of the Stafford County, Virginia area.  (Area became Prince William County, and then Fairfax County) – on the Potomac River in the Northern Neck of Virginia.  See William Going’s page (click link above for William Going).   The numbers and matches are at the bottom half of this page below.

In addition to the Y-DNA results that match the descendants of William Going b. abt 1682 and John Hollis b. abt 1700, there are several documents that connect the families.   The Going family, Hollis family, and Gladden family all appear to have lived close to each other in the Stafford County, Prince William County, Fairfax County, Virginia areas at the same time – and appear in documents on behalf of each other.  All three families then appear close to eachother and again signing each other’s documents on the border of Virginia and North Carolina – in Brunswick County and Lunenburg County, Virginia, and Orange County, North Carolina.  Finally, several members of each family appear to move together to Fairfield County, South Carolina about the same time, and again, each appear in eachothers land documents, wills, and probate papers.

See the following pages for Going, Gladden, and Hollis relationships (the following pages show how Going, Hollis, and Gladden family members show up in documentation for each family for about 100 years – from the 1730s to the 1830s – starting in the Potomac River area of Virginia (Stafford, Prince William, and Fairfax Counties), moving to Lunenburg and Brunswick Counties, Virginia, moving to Orange County, NC, and then moving to Fairfax County, SC – all at about the same times, and continuing to show up on each other’s documents at each move:

3) John Going b. abt 1700: https://goyengoinggowengoyneandgone.com/1710-john-gowen/ (a) 1739 July 23 – John Hollis posts bond on widow Catherine Padderson’s (previously Catherine Going), probate in Prince William Co, Va) – she is parent of John Going b. abt 1700, and Alexander Going b. abt 1715.  Ann Gladin (Gladden) is a witness on the will.  John Going is the executor in Prince William Co, Va; (b) 1757 Nov 1 – John Goin, William Goin, John Goin, Junr, and William Glading (Gladden) are appointed to do repairs to road according to Lunenburg Co Road Orders in Lunenburg Co, Va.; (c) 1762 Dec 11 – John Going Sr receives 700 acres on Moon Cr, son William Going is chain carrier, and William Gladin (Gladden) lives adjacent to this land in Orange Co, NC.

4)  Alexander Going b. abt 1715:  https://goyengoinggowengoyneandgone.com/1715-alexander-gowen/

11)  Daniel Goyen (or Going) b. abt 1748:  https://goyengoinggowengoyneandgone.com/daniel-going-b-abt-1753-married-to-jean-going-in-fairfield-co-sc/

20)  Moses Hollis b. abt 1775:  https://goyengoinggowengoyneandgone.com/1775-moses-hollis-son-of-james-hollis/

21)  Littleton Hollis b. abt 1785:  https://goyengoinggowengoyneandgone.com/1760-littleton-hollis/

22) Mary Going b. abt 1787:  https://goyengoinggowengoyneandgone.com/1779-mary-polly-going-m-thomas-hughes/

23)  Daniel Goin b. abt 1790:  https://goyengoinggowengoyneandgone.com/1790-daniel-goin-in-fairfield-county-sc/

24)  Derrell Upright Hollis b. abt 1802:  https://goyengoinggowengoyneandgone.com/1802-derrell-upright-hollis/

I reviewed the Hollis family Y-DNA project.  It appears to me, that all the Hollis men who have tested their Y-DNA that came out of the  John Hollis b. 1700 line seem to all have the same Y-DNA as we do.  I haven’t seen any descendants from John Hollis b. 1700 (of Stafford Co/Fairfax Co, Va) with different Y-DNA results that match another Hollis family member that claims to be from the same line.  Same with the Going/Gowan/Goyen Y-DNA results for the descendants of the brothers – John Going b. 1700 m. Mary Keith, and Alexander Going b. 1715 (both sons of William Going b. 1682) – all of Stafford County, Va – who also moved to Orange Co, NC and then to Fairfield Co, SC.   I have not seen two or more Going results of those who can document being descendants from those lines that have different Y-DNA results that match another Going descendant from that line.

Without any significant number of other Going or Hollis family members testing with other Y-DNA results (that match eachother), this tells me that these two Going and Hollis lines have a common paternal ancestor prior to 1700.  This is before the date John Hollis was born – as it appears John Hollis b. 1700 was in the E-M2 haplogroup as well as John Going b. 1700 and Alexander Going b. 1715 – all with results from their descendants that indicate a common paternal ancestor.

The Hollis family members with the same results as the Going family may have been from an adoption, or a pregnancy out of wedlock – where a Going child had been brought up by a Hollis family member and that child was given the Hollis name.  Or the reverse is possible, that a Hollis child was born out of wedlock and raised as a Going, or a Hollis child was adopted by a Going family.   Whatever the nonpaternal event was, it must have occurred prior to the birth of John Hollis in 1700, as descendants of his sons James and Moses both have matching Y-DNA, meaning the father, John Hollis b. 1700, passed this Y-DNA to his children.

Same can be said for William Going b. 1682.  Descendants of his sons John and Alexander both have matching Y-DNA, meaning this Y-DNA was passed to them by William Going by his father when born in 1682.

I have corresponded with several Goin/Going researchers who also think that the Hollis line is a “non-paternal event”.  I can not say that they are right or wrong based on what I’ve seen.

For the Hollis line to be the result of a “non-paternal event”, you would assume that there would be two Y-DNA groups coming out of the Hollis family members who descend from John Hollis b. 1700.  So far, that has not been the case.  Same with the Going family testers who descend from John Going b. 1700 and Alexander Going b. 1715 – again, only one group of results, not two.

These Y-DNA matches are based on only 15 Going/Gowan/Goyen descendants, and 6 Hollis descendants.  If I start seeing a group of Going testers or Hollis testers who document that they are from those two lines coming, and if those testers have different Y-DNA results (that match others in their groups), then I will need to reconsider this theory.

For now, I’m thinking that the John Hollis b. 1700, John Going b. 1700, and Alexander Going b. 1715 all probably had a common paternal ancestor (father, grandfather, ggrandfather, etc), somewhere down the line before 1700 – whether that person was a Hollis or a Going is not known.

If the non-paternal event occurred prior to 1700 between the Going family and Hollis family, then that only leaves about a 65 year window in which it could have occurred in the Americas (between 1635-1700).

The reason I think this is significant is due to the question it raises regarding the EM2 haplogroup we belong to.  I have not met a Goyen or Going that is related to me, or who matches me, who does not look “white”, but obviously, based on the EM2 haplogroup, the original ancestor who bore the Going (or Hollis) surname came from Africa and likely had the appearance of a black African.

For me, this raises the following questions:

1) How long has the Going family (my line), and Hollis family that belongs to the same line, had the appearance of being white?  When did the Going (or Hollis) original paternal ancestor who was African, first marry/have children with whites?  Was it here in the Americas (in that 65 year window between 1635-1700)?

2)  Is it possible that the Going (and Hollis) lines that match our Y-DNA came to the Americas appearing to be white?  If so, then when and where did this mix occur?  In the Caribbean Islands prior to moving to the mainland (Maryland or Virginia)?  In England – despite being a very “white” nation, England has always been a very cosmopolitan country – with invaders, immigrants, and merchants from all over the world.

I bit the bullet and paid to have my Y-DNA tested with Family Tree DNA.

The following are the results:

To simplify the three result groups I entered the names of those tested, how many markers they tested, and the genetic distance in a chart below.   What this chart shows are the people who have tested through Family Tree DNA who are a “match” to me according to Family Tree DNA.

The fact that the highest number are Goin/Goins/Goen/Goyne type names – for me – confirms my genetic line goes through this particular Goyen-Goin line.  The Hollis, Keith, and Cook names also help out – John Going born about 1704 was married to a Mary Keith – it appears the Going and Keith families moved near the same times from Stafford County, Virginia, to the Virginia/North Carolina border – and then several Keith’s and Goings moved to South Carolina near the same time.  Similarly, with the Hollis family, John Hollis posted bond on Catherine Going Patterson’s probate in 1739 (she was mother of John Going born 1704 – she remarried to a Patterson after her husband William Going died in 1725).  John Hollis’ children, Moses Hollis and Notley Hollis had several land transactions with Alexander Going, John Going, and William Going in Orange County, North Carolina (these were the children and grandchild of Catherine Going Patterson).   Several of the Going and Hollis families moved to Fairfield County, SC about the same time, and they are listed on eachother’s paperwork found in that county – including probate papers.   This likely means that the Hollis and Keith members listed are descended from a Going male who either died while their children were young, and so a Keith or Hollis adopted and raised that child as their own, or some other non-paternal event.

The fact that there are multiple Hollis and Keith members listed – for me – confirms that our line goes through John Going born about 1704 and Mary Keith.  Which is what I suspected based on the documents anyway – but I wasn’t as sure previously.

Our haplogroup is E-M2 – According to Wikipedia:  “The E-M2 branches are the predominant lineage in Western Africa, Central Africa, Southern Africa, and the southern parts of Eastern Africa.”  https://en.wikipedia.org/wiki/Haplogroup_E-V38 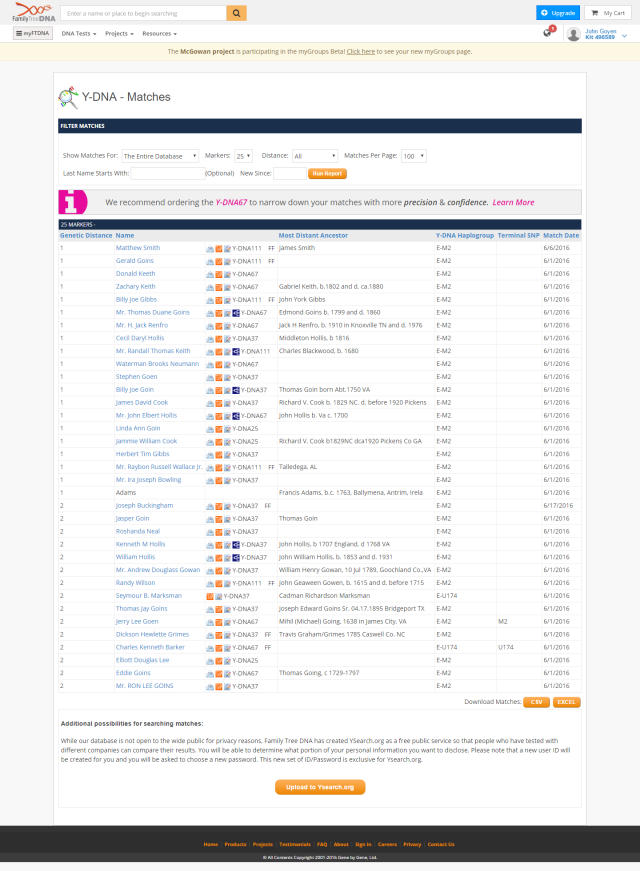 15 Responses to Y-DNA for Goyen/Going, Keith and Hollis families