(Link to page on various William “Going’s” and other variations of last name.  See this page to compare this William Goyens to other William Going variations that were in the VA, NC, or SC areas in the 1700s.  List is not complete, but I’ve listed those I know about so far:  https://goyengoinggowengoyneandgone.com/various-william-goings-different-ones/ ).

Married in 1798 per Mary Going, in Patrick Co, Va. by John Nunn a Baptist minister. 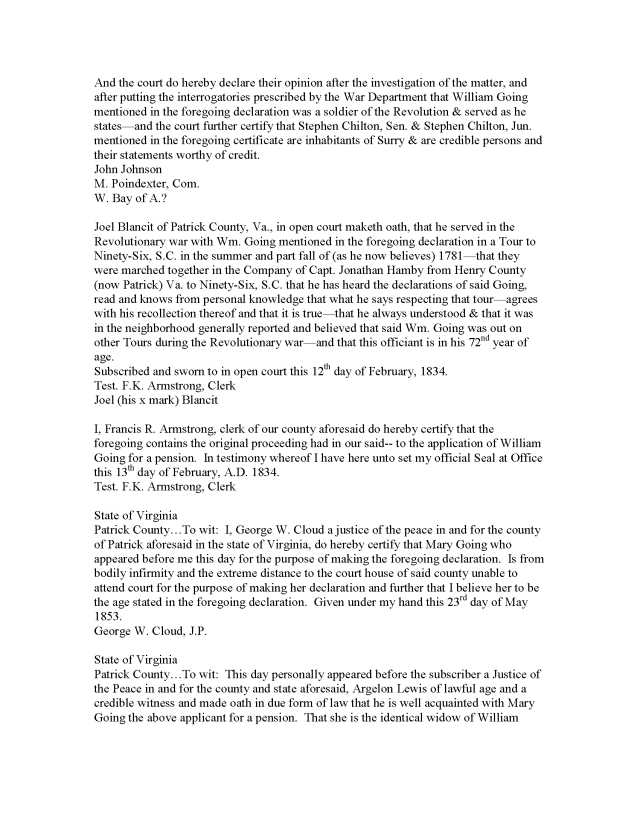 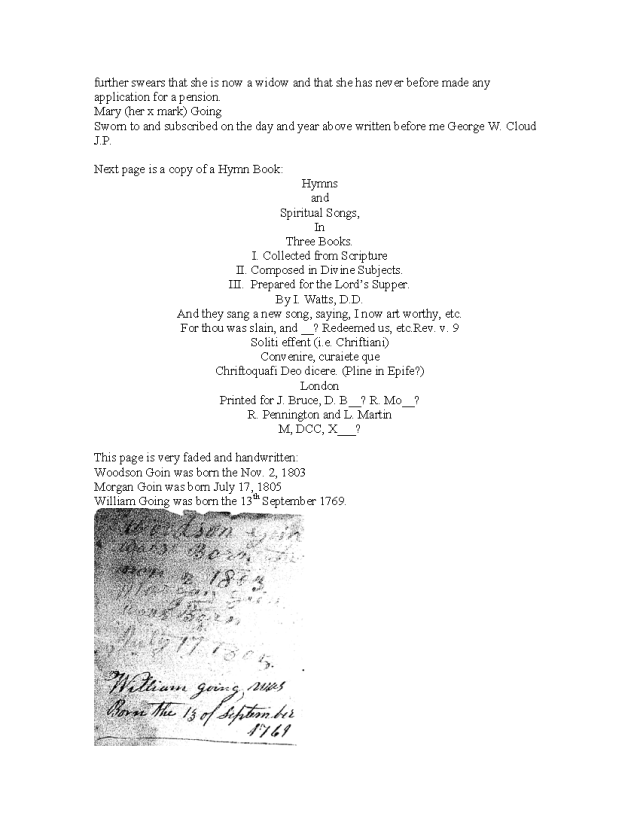 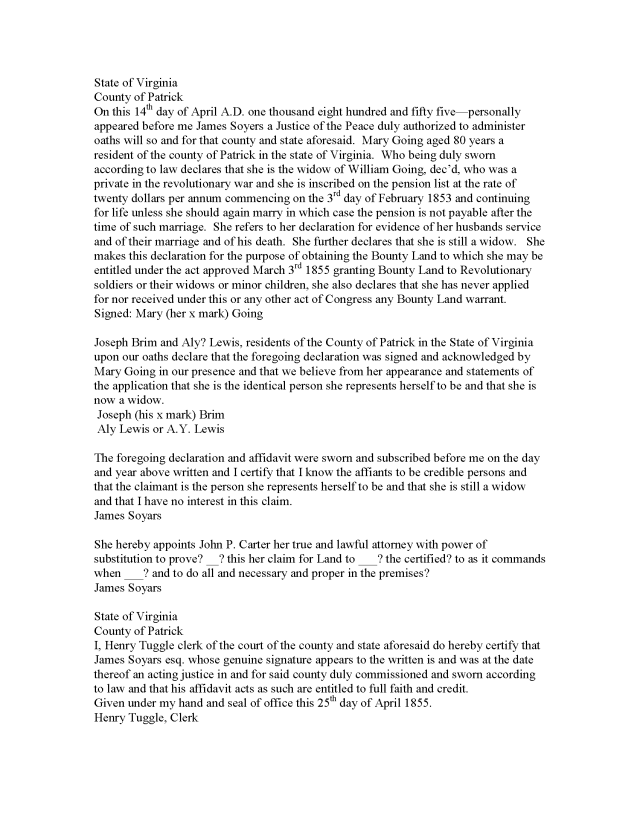 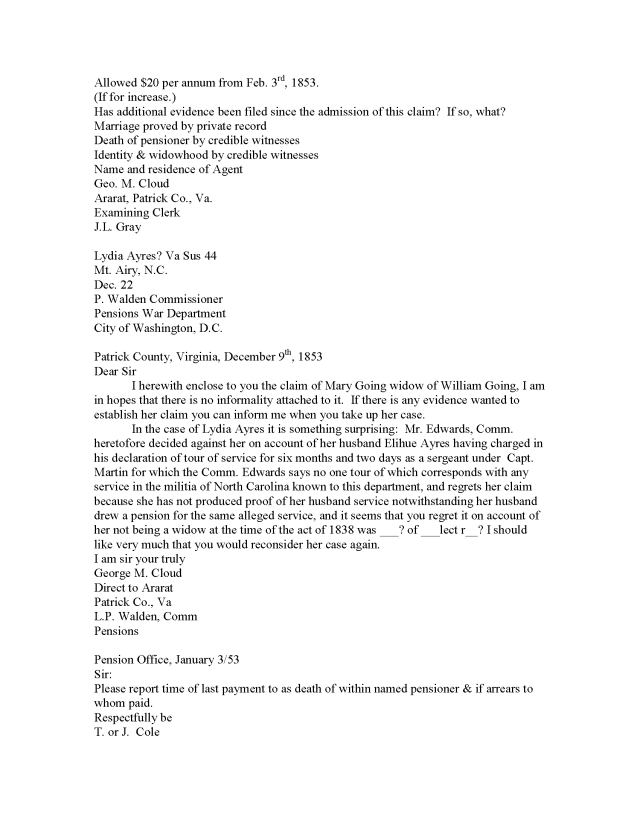 Nineteen-year-old William Going and his First Virginia Regiment of the Continental Line got off to a bad start when they began taking on the British Redcoats in the Revolutionary War. In his first encounter, the bloody Battle of Guilford Courthouse, the fighting raged all day, back and forth, in the cornfields north of present-day Greensboro, North Carolina.

The two armies, the Americans under Gen. Nathanael Greene and the British under Gen. Charles Lord Cornwallis, fought to a standstill on March 15, 1781, and casualties were heavy on each side. Each had to withdraw, leaving their dead and wounded on the field. New Garden Monthly Meeting, a Quaker church stood just west of the battlefield, and as soon as the firing ceased, the church building became a hospital. Churchmembers went to the scene of the carnage and brought the wounded, both British and American, to the church and began to bind up their wounds.

A month later, Gen. Greene had his reduced army of only 840 men facing Lord Rawdon in the Second Battle of Camden, South Carolina. Rawdon made a surprise attack on Greene April 19, 1781, inflicting 271 casualties and driving him from the field. The persistent Greene summed up the situation, “We fight, get beaten and fight again!”

William Going survived both of the disastrous battles as well as the subsequent campaign in South Carolina. Following the end of the war at Yorktown, he was discharged in South Carolina and walked back home to Henry County, Virginia.

William Going, a Melungeon/mulatto, was born September 13, 1761 in Rockingham County, Virginia. He stated that his date of birth was recorded in his family bible which was given to him by his father, name unknown. When he was very young, his family removed to Henry County, according to his Revolutionary pension application. He enlisted there under Capt. Shaw in the Virginia Continental Line.

When Patrick County was organized from Henry County in 1790, the Going land lay in the new county, according to “Genealogical Abstracts of Revolutionary War Pension Files” by Virgil D. White. He was married to Mary “Polly” Overman February 17, 1802 by John Nunn, M. G, according to Patrick County Marriages, 1791-1850.” Thomas Beasley was surety. Benjamin Hails was a witness. The bride was born about 1775.

William Going appeared in the tax records of Patrick County from 1798 through 1817. In 1814, he appeared as a taxpayer there, but a notation on the tax roll showed his residence “in North Carolina on Little Dan River.” It appears that he disposed of his Virginia land about 1817.

William Going and William Going, Jr. were listed as heads of households in the 1810 tax list of Patrick County as reproduced in “A Supplement to the 1810 Census of Virginia.” The two are not regarded as father-and-son. The enumerator probably appended “Jr.” to designate the younger of the two.

William Going was enumerated as the head of Household No. 275 in the 1840 census of Surry County:

The enumerator noted on the census form that he was “78 and drawing a pension for Revolutionary War military service.”

It is believed that William Going died about 1842 in Surry County. After his death, Mary “Polly” Overman Going returned to Patrick County. She was enumerated there in the 1850 census as the head of Household 660-699:

A notation by Virgil D. White reveals that “there were some family records on a sheet which was too dark to read on this film, see National Archives Series M804, Roll No. 1087 for entire file.”