John Gowing b. abt 1600-1615  (Note:  It is unknown if John Gowing b. 1600-15 had any children.  The following are noted in Virginia, and appear to have been transported from Maryland, or are not noted as being transported – meaning possibly born in Virginia.  They are the age that his children would be – a best guess based on information available).

Both a John Goane and a William Gowin arrive in Virginia in the 1650s, and both appear to be in the York County, Virginia area.  John Goane appears to have arrived from Maryland – likely he left for Maryland shortly after arriving in 1635, either on his own, or as an indentured servant.  William Gowin arrived in York County Virginia in 1653, and may have come from Maryland as well.   There was a large movement of people from Maryland to Virginia in the 1650s.  In 1650, the Puritans in Maryland revolted against the proprietary government, they set up a new government prohibiting both Catholicism and Anglicanism.  William Stone, the Governor of Maryland, was exiled to Virginia during the revolt.   The Puritan revolt lasted in Maryland until 1658, when the Calvert family regained control and reinacted the religious “Toleration Act”.

October 18, 1650 a John Goane is transported to Virginia by a Walter Broadhurst, Gent., who receives 500 acres on the S. side of the “Potomeck” R. near the mouth of Canowoman Creek. Others transported were William Hardigg, Robert Beard, William Enson, Ann Knowles, Richard Broadman, Humphrey Farmar, John Piper, Richard Sabrell, and 2 Indians.  (See note 9 below).    Obviously, the “2 Indians” were not transported to Virginia from England or Europe – they had to be transported from another location in the Americas.  Looking at the others listed as being transported, William Hardigg, John Piper, Robert Beard, Richard Sabrell – all these people are noted in documentation related to Maryland.  (See:  John Hollis 1612 to 1615). 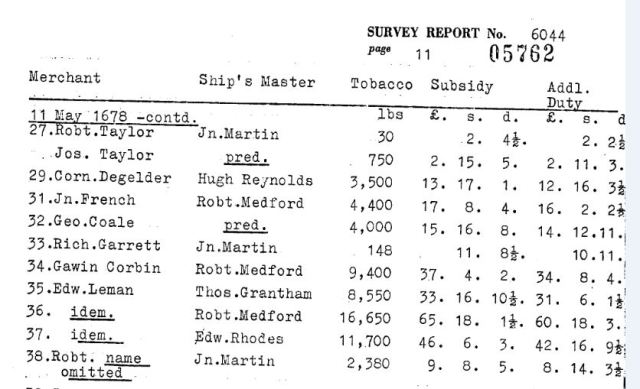 1702 June 6 – William Gowing of Virginia involved in a lawsuit involving cargo to send to Virginia on a ship taken by pirates in 1685. Insurance claim put in. They delayed paying him, and he brought a complaint against Sir Bridges Nightingale, Sir Robert Knightly, Daniel Perrott, and Edward Ambrose.   http://lva1.hosted.exlibrisgroup.com/F/NUXGTGU21PJDCXUBKG3PDBV219M4QEL55EPI2E853P1FEJACEA-10864?func=full-set-set&set_number=005783&set_entry=000001&format=999 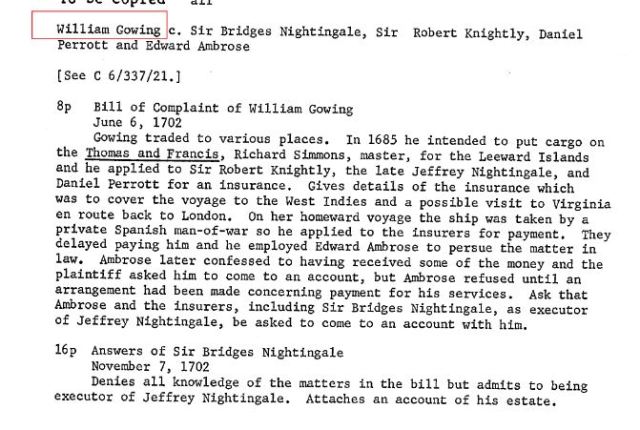 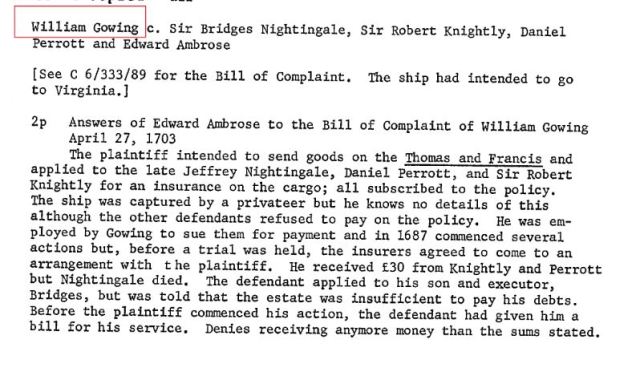 30) 1674 July 24: p. 78 Whereas I gave the wife of me, Maj. Wyatt, in her widowhood with my consent, 100 pounds, as a jointure out of her estate, besides what what is given and enjoyed for her only child, Anne Jackson, which by two deeds under her hand dated 26 Feb. last; and whereas Mr. James Bray, one of the feoffees in behalf of my said wife and said Anne Jackson covenants, be it known that for fulfilling of said deeds made by my said wife Anne for herself and her daughter Anne Jackson, I Maj. William Wyatt assign to Hon. Nathaniel Bacon, Mr James Bray, & Mr Edward Bray the whole of that estate I had on hand in right of marriage to said wife, and give bond of 300 pounds.
14 July 1674.    William Wyatt
Wit: Edward (W ) Frisell, Thomas Richards, John Gawen
Recorded 24 July 1674