1780 – Rev War Pension application of Jesse Hodges R5087
… That he was born on the Eleventh day of February in the year of our Lord 1754 in Halifax County State of Virginia, from Halifax County I moved when very young to Pittsylvania County in the same state, there I resided when I entered the service of the United States as a volunteer Soldier which was on or about October 1780 under Captain William Dick, first Lieutenant William Wilkerson, Orderly Sergeant David Chisum.
After our Company was organized we marched from Pittsylvania County where I volunteered to Halifax Old Courthouse, here my Company and self joined the Brigade commanded by Colonel Haynes Morgan General Stevens who was under the immediate command of General Green from here we marched with General Green in various directions through Virginia and North Carolina, when the Army got to Guilford County North Carolina. We encamped a very short time. While here the Army wanted Wagon and Teams [to] Convey provisions &c and by some means the Commanders found out that I had a Wagon and Team at home so I was sent by General Orders to get my Wagon and Team, three men was sent with me as a guard. I returned so soon as I possibly could and joined the Army again with my Wagon near the same place I left it in Guilford County North Carolina. I was then placed under the command of Abner Wells wagon master. I understood that a man by the name of Jemison was hid Wagon Master. When I joined the Army with my wagon I believe it was in February 1781 as well as I now recollect – I was with the Army when we had an attack at Ramsay’s Mill from here we went on to Guilford Courthouse, and was there when the Battle commenced, but was ordered to drive my Wagon and Team to Troublesome I am Works which we done, After the Battle was over the Army came to where we were, where the Army halted a short time, and then started in pursuit of the British.
We followed them across deep River then into South Carolina at this time I left the Army and went home having served in this Campaign from October to May following. I volunteered for the Term of six months which time I fulfilled, and several weeks over. I cannot now recollect the precise number of weeks over six months but I am positive it was not less than three weeks – he further states that he received a written Discharge signed by Captain William Dick also a Discharge for my Wagon not believing they would ever be of any service to me I used them carelessly so they have long since worn out and destroyed or I have lost them …

1783 Feb 21 – Adam Chisholm fr Benjamin Vaughan, Deed bk 12, p 335. Halifax Co, Va.
… between Benjamin Vaughan late of the Parish of Antrim and County of Halfix of the one part and Adam Chisholm of the parish and County aforesaid of the other part … in consideration of __ thousand five hundred pounds … to the said Benjamin Vaughan in hand paid by the said Adam Chisholm … discharge unto the said Adam Chisholm … land situate lying and being in the Parish and County afsd on both sides of the Upper Fork of Terrible Creek containing by estimation 100 acres … purchased by the said Benjamin Vaughan of Thomas Elliott being part of 800 acres land surveyed for Richard Echols in two surveys and granted unto Anthony Griffin by letters patent … the 16th day of August 1756 … bounded by the lines and adjoining the lands of James McCraw, William Green, William Robertson, Fontaines ___ and John Phelps …
Signed: Ben. Vaughan
Wit: James McCraw, John Murphey, William Maxey, Edward Wells.
(Proved and ordered to be recorded on July 17, 1783)
https://www.familysearch.org/ark:/61903/3:1:3Q9M-CSL6-49CT-L?i=197&cat=406522

1786 Feb 14 Henry Barnes from Adam Chizholm & Bartlet Gwinn, Deed bk 14, p 535. Halifax Co, Va
… between Adam Chizholm and Bartlet Gwin of the one part and Henry Barnes of the other … in consideration of the sum of 125 pounds … to the said Adam Chizholm and Bartlett Gwinn … confirm unto the said Henry Barnes .. land whereon the said Adam Chizholm now lives and which he purchased of Benjamin Vaughan by Deed … containing by estimation 100 acres … bounded by the lines of James McCraw, John Coleman (formerly Fountain), William Robertson, and the sd Gwin … also one other divident of land containing by estimation 13 acres be the same more or less (being part of a larger tract of land granted unto the said Bartlett Gwinn by patent) adjoining to the former tract or dividend on the Northwest part thereof and bounded by William Robertsons lines on the West and along the said lines to the first branch … to the said Chizholms line … with all singular the appurtenances thereunto belonging unto the said Henry Barnes his heirs and assigns forever …
Signed: Adam Chisholm, Bartlett Gwinn
Wit: James McCraw & Chisom, William P Green, William Robertson, John Bailey
(as to Chisholm
Almond Gwinn & Bartlett
https://www.familysearch.org/ark:/61903/3:1:3Q9M-CSKJ-SQRK?i=275&cat=406522

1791 Dec 27 – Pkg. #34 Estate of David Chisholm Union County, SC
Will of David Chisholm. Written : 27 Dec 1791. Recorded : 6 Apr 1792.
“In the Name of God Amen
I David Chisholm of the State of South Carolina and County of Union, being weak and low in Body, but of Perfect mind and memory; make this my last will and Testament,
… First, I desire to be buryed in a Christian like manner, and after my Funeral expences are paid.
The remainder of my Temporal Estate I bequeath and dispose of in the following manner (To Wit):
… I desire that all my just debts to be paid.
… I next bequeath to my father all the cash I have in hand together with what money I have lent out,
… The ballance of my Estate I bequeath to my Brothers and Sister, to be disposed of an divided in the following manner,
… My negroes (ToWit) Lewis and Fanny her child and all her increase to remain, untill my brother Samuel arives to the age of 10 years, and then to be equally divided,
… and my stock of every kind to be disposed of at the discretion of my executors,
… and the moneys arising therefrom together with all ballances, arising from debts due me except the above mentioned lent money, to be equally divided, amongst my Brothers and Sister,
… I constitute and appoint my well beloved friends John Henderson & Obadiah Trimmier and my brother William my whole and sole executors of this my last will and Testament, ratifying this and no other to be my last will and testament in witness hereof I have hereunto set my hand and seal the 27th day of December in the year of our Lord 1791.
Signature: David Chisholm
Signed Seal’d published and Declar’d to be his last Will & Testament in the Presence of us: Charles Green, Jesse Mabry, John Beckham Junr
Proved in Open Court the 3d day April 1792 and Admnr Granted. Ben. Haile, DC.
“South Carolina Probate Records, Files and Loose Papers, 1732-1964,” images, FamilySearch (https://familysearch.org/ark:/61903/3:1:939L-FNK9-8?cc=1911928&wc=MPPL-GP6%3A190569301%2C190568402%2C191255802%2C191306801 : 21 May 2014), Union > Probate Court, Probate records > 1777-1961 > Box 01, Packages 1-67 > image 200 of 416; county courthouses, South Carolina, and South Carolina Department of Archives and History, Columbia. (Pkg. 34).
https://www.familysearch.org/ark:/61903/3:1:939L-FNK9-8?i=199&cc=1911928&cat=443574

The above entry shows that William Chisholm rode to “Augusta” on estate business for David Chisholm’s estate in 1792. This raises the questions – which “Augusta”?  Augusta, Georgia or the County of Augusta in Virginia? There was a “Road to Augusta” Georgia nearby – so it seems closer – but the family came from Virginia in 1786. What was the “business” being done for the estate? 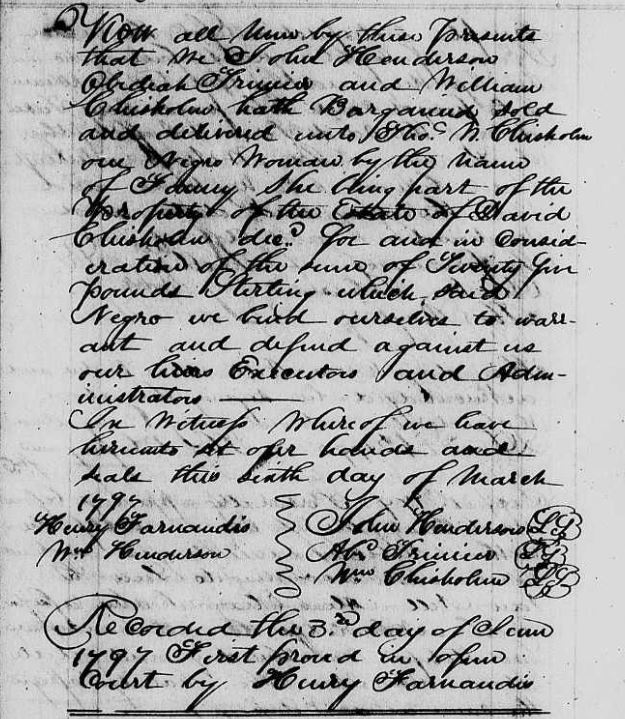 1797 March 7 – Trimmier and William Chisholm to Watt Chisholm – Conveyances (deeds), v. C-E 1791-1799 p. 32 – I do hereby acknowledge that I have received of John Henderson, Obediah Trimmier and William Chisholm the sum of 75 pounds sterling of the estate of David Chisholm deceased and upon a final settlement if should appear that I have received more than my legacy, I hereby promise to return to the said John Henderson, Obediah Trimur and William Chisholm such ballance as may appear due from me to said estate.
Signed: Watt Chisholm
Wit: Henry Farnandes
https://www.familysearch.org/ark:/61903/3:1:3Q9M-CSKJ-GQVQ-4?i=511&cat=340217

1797 June 2 – Adam Chisholm to Est of David, bk E, p 31-33 Union Co, SC
… Adam Chisholm of the State of South Carolina and County of Union acknowledge myself indebted to John Henderson, Obediah Trimmer and William Chisholm executors of the estate of David Chisholm deceased in the sum of 55 pounds sterling to be levyed of my goods and chattles lands and tenaments if the said Adam Chisholm shall fail in the condition under written.
The condition of the above obligation is such that whereas Nancy Chisholm daughter of the above named Adam Chisholm being now under age, did on the 4th of this instant purchase of the above executors one negro girl named Lucinda the property of the above estate at the price of 55 pounds no if the said Nancy Chisholm when she arives at the age of 18 years comply with the terms of sale and with the true intent and meaning thereof then the above obligation to be void as else to remain in full force in law.
Signed: Adam Chisholm
Wit: H Farnandis, John Beckham
By the oath of Henry Farnandis and recorded the 2 June 1797.
https://www.familysearch.org/ark:/61903/3:1:3Q9M-CSKJ-GQV7-4?i=512&cat=340217