Sarah Going b. abt. 1800 married to Thomas Noland
(Unk children)

Unknown at this point – it appears they may have had children, but still working on this part.  They were married at minimum from 1817 to 1823, and possibly as long as 1816 to 1829 (minimum 6 years, possibly 13 years).    Even if only 6 years, it seems likely there were children born of the marriage.

Sarah Going was born about 1800.  Her parents are Elijah Going and Docia Bland Going.

Her father Elijah Going dies in 1807.

Sarah Going was married some time in 1817 or before 1817 to Thomas Noland.

A March 25, 1817 distribution out of Elijah Going’s estate is noted in the guardian account in York County, SC.  George Plaxco received $487.57 “settlement” – from “Isaac Gowen, administrator of the estate of Elijah Goen”.  It appears to note a receipt regarding this $487.57 distribution paid to Thomas Nolin, Sarah Going’s husband. 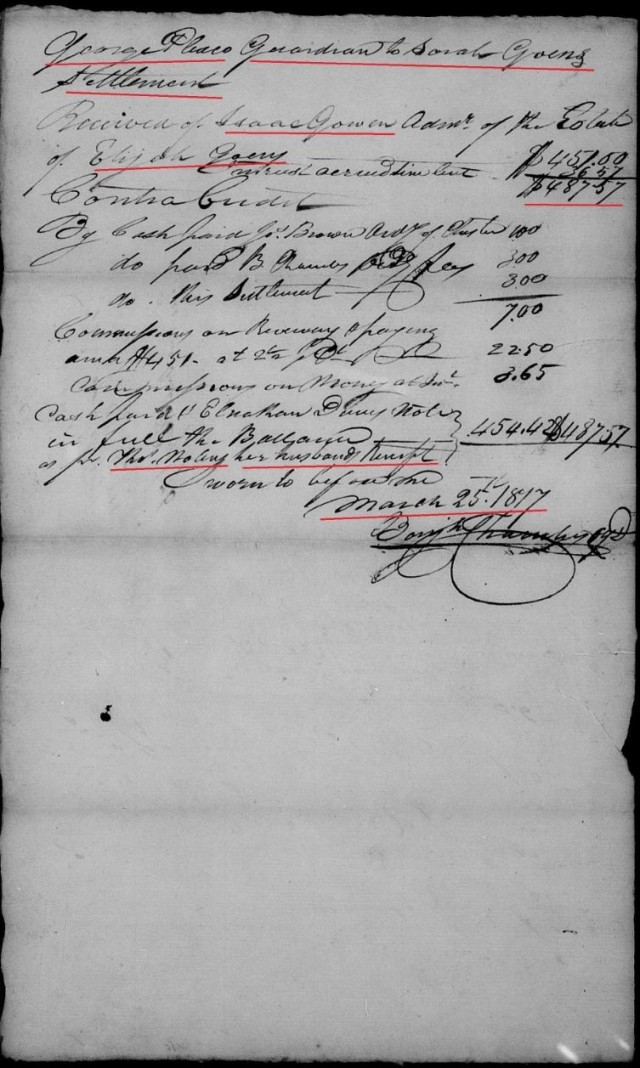 Fredrick Tucker, a  longtime Going family researcher, uncovered and was able to share the following partial transcript of a petition to the Chester County, South Carolina courts in June 1823 that states in part:

“Chester County (SC) Equity Bill #105, frames 128-136, James Reid vs. John Plaxico and others.”  It is a writ of partition, with some of the papers dated 1823 but most are dated 1824.  The writing is very difficult to read.  This is an abbreviated transcription:

To William McCreight, John Gilmore, John Bearden, Thos. Mc(illegible) and James McCluney or any three of them

Elisha Goyen died seized of one tract of land containing one hundred and fifty acres, lying and being in Chester District and State aforesaid and at the time of his death left Doshe Going his widow now the wife of John Plexico entitle by law to one third of the said Estate, Sarah Going now the wife of Thos. Nowlen, Drury Going the son of the deceased now a minor about seventeen years old, are each entitled to one half of the estate remaining two thirds and whereas a summons in partition has found requiring the said John Plexico and Sarah [sic] his wife to show cause if they could why a division and partition of the said land should not be made according to law.  And they have failed to do so or show cause…”

It appears to be dated “the third day after the second Monday in June Eighteen Hundred and twenty three and in the forty seventh year of the independence of the Unites States of America”.  https://www.familysearch.org/ark:/61903/3:1:3Q9M-C348-PSMC-X?i=554&cat=260591

This places her brother, Drury B. Going’s date of birth around 1805-1806.  It also verifies that Sarah Going is still married to Thomas Noland.

It appears that  Thomas Hughes Noland was the husband of Sarah Going.   Some time after 1823-24 Sarah Going appears to have died.

There are several Noland, Hughes and Going families in Tuscaloosa County, Pickens County, and Jefferson County, Alabama starting in the 1820s.

Thomas Hughes Noland moves to Pickens County, Alabama by 1830 and was living next to the Hughes and McCracken families.

1830 US Census in Pickens Co Ala w Thos Noland

1840 US Census in Pickens Co Ala w Thos Noland

Connections to the Noland, Hughes, and Going families:

A large number of Drury Going b. 1749’s children or grandchildren ended up in Pickens County, Alabama starting in 1823 through the 1850s.