1808 James Muse, Sheriff of Fairfield District. Sterling Tidwell had 134 acres in Fairfield County, SC.    William Smith obtained a judgment against Sterling Tidwell on Oct 16, 1808 for 67 dollars and 59 cents, plus another for 13 dollars and sixty six cents, plus costs.  The land was seized and sold at auction to the highest bidder. John Hollis Jr was the highest bidder at 2 dollars. The land was conveyed to  John Hollis Jr. Witnessed by Daniel M. Muse, and Elias T Muse. (The use of the name “John Hollis Jr” makes me think this might be John Hollis’ son, and that possibly he predeceased his parents, and that is a possible reason he is not listed in their will/probate paperwork). 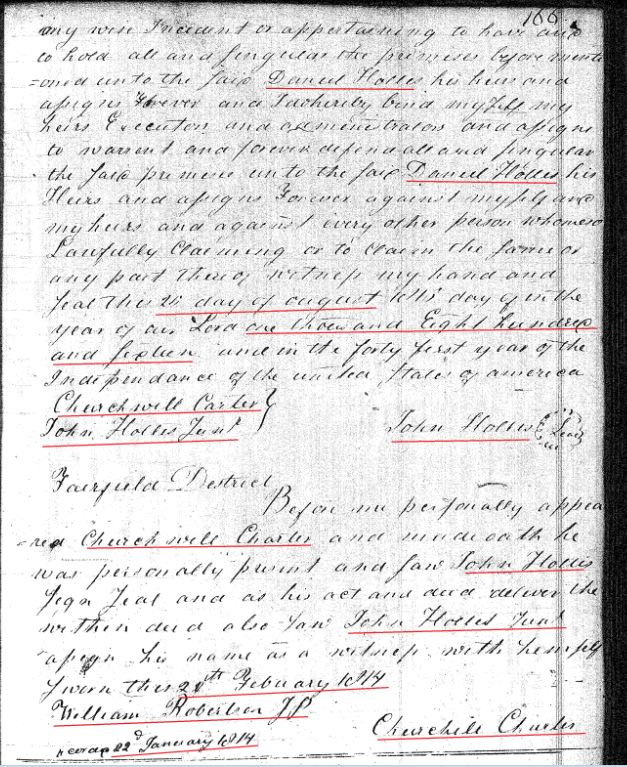 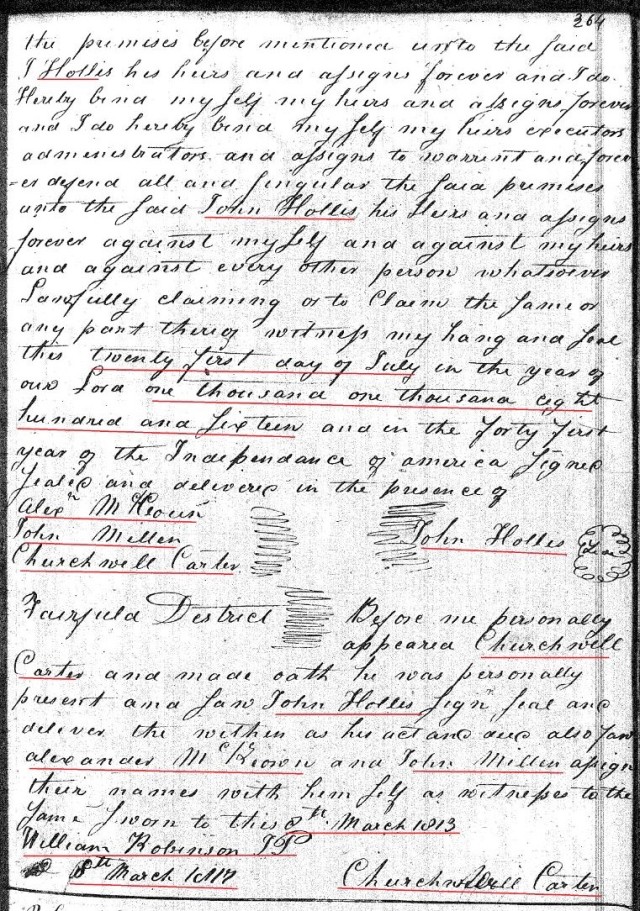 March 1, 1817 General Zachaiah Canty of Kershaw District conveys to John Hollis Jr of Fairfield District a half tract of land formerly owned by James Hollis, the purchased by Zachariah Canty at a Sheriff’s sale, containing 200 acres. Witnessed by John Canty and Willis Whitaker. 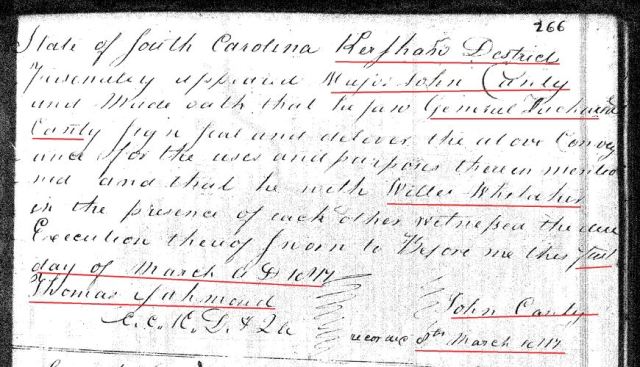 April 8, 1822 John Hollis Jr of Fairfield Dist sells 126 acres of land to Jepethy Pickett for 670 dollars. The land is described as being originally granted to William Smith for 200 acres, conveyed from Smith to Moses Hollis, and then from Hollis to Edward Pig, and then from
Pig to John Hollis Senr, and from John Hollis Senr to John Hollis who is selling to Jepethy Pickett. The land is on the Mill Branch of the Wateree River, bounded by land originally surveyed for Notly Hollis, and bounded by Zephethy Pickett’s land, by Morning Fogg’s land, and by land belonging to the estate of Daniel Hollis deceased. Witnesses: Abraham Ferguson and Moses Knighton. On May 15, 1822 Thomas Lumpkin witnesses and makes oath that Letty Hollis, wife of John Hollis Jr, has released her claim of dower. Signed by Letty Hollis. Witness: Thomas Lumpkin.

This deed confirms several things:  Daniel Hollis has died by April 8, 1822, Letty Hollis is the wife of John Hollis Junr, and Moses Hollis‘ land was adjacent to Notly Hollis land. 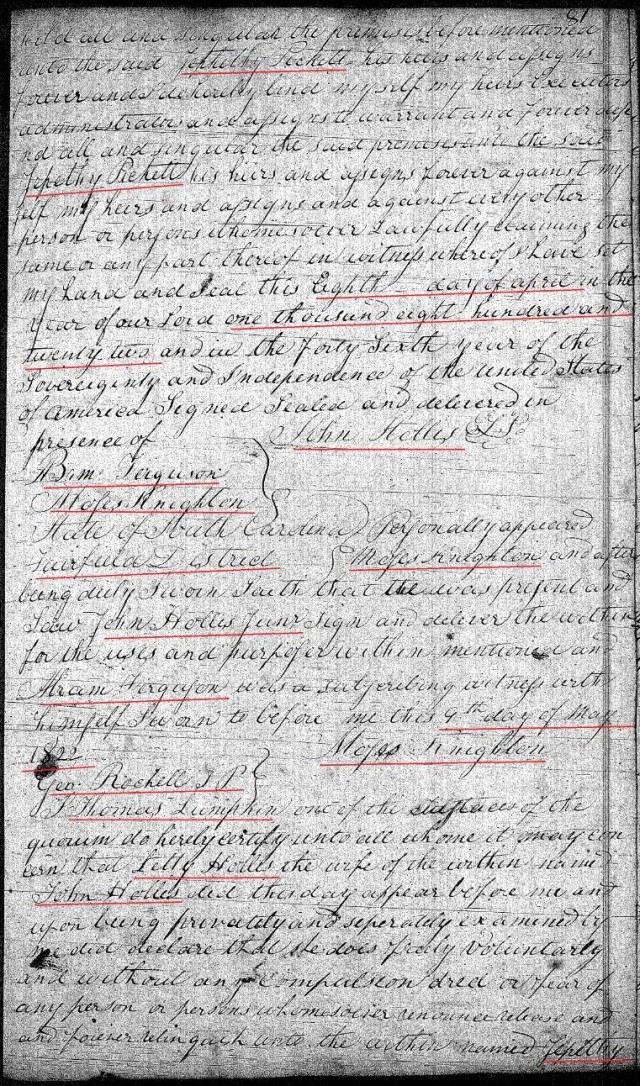 April 8, 1822 John Hollis of Fairfield Dist sells 100 acres of land to Jepethy Pickett for 500 dollars. The land is described as one half of a tract originally granted to John Lee for 200 acres. Lee conveyed to Notley Hollis, Notley Hollis’ daughter, Elizabeth Hollis conveyed to
James Hollis, and the Sheriff conveyed to Genrl Zachariah Canty, and Canty conveyed to John Hollis. The land is located on the Mill Branch of Wateree Creek, bounded by lands of Richard B Harryson, John Pickett, and Burrell Hollis’ lands. Witnessed by Abraham Ferguson and Moses Knighton. On April 30, 1822 Letty Hollis, wife of John Hollis, releases her claim of dower. (This confirms that this is John Hollis Junr – as Letty is his wife). 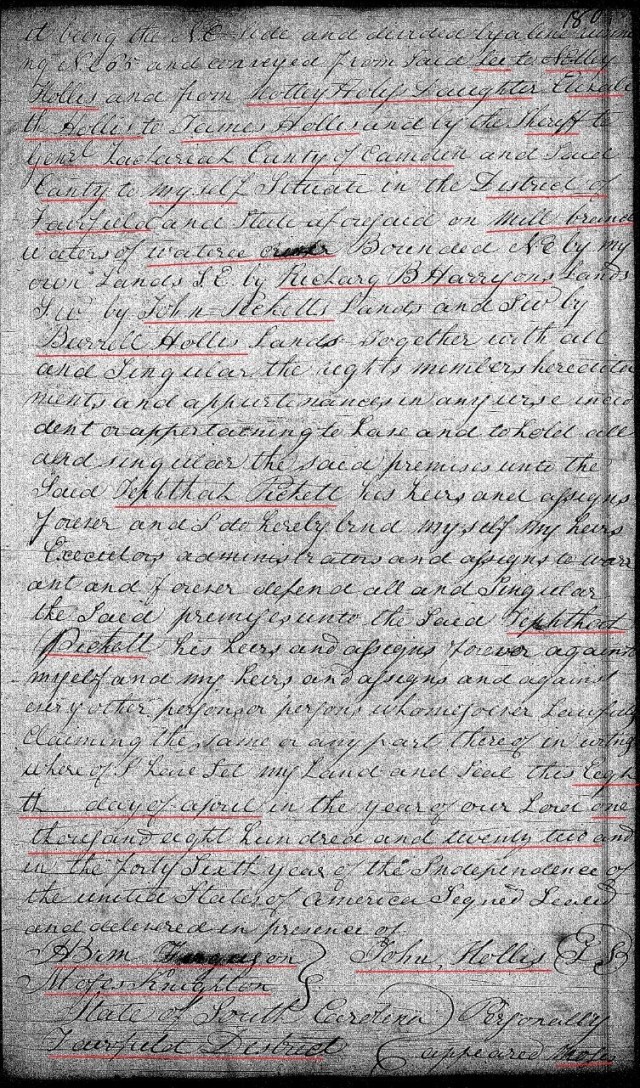 December 24, 1829, Ramond Woodward of Fairfield Dist planter, for 136 dollars paid by John Hollis of Fairfield, conveys 50 acres of a 100 acre tract that was originally granted to
William Sanders on July 12, 1771 that is on Cedar Creek of Broad River, bounded by David Aikens land, Elias Fish’s land, and Jacob Sellars land. Witnessed by: Brakin Moss, John Naaman, and David B Martin. Martha Woodward, wife of Ramond Woodward, gave up her right of dower in the land. Fairfield Dist, SC.